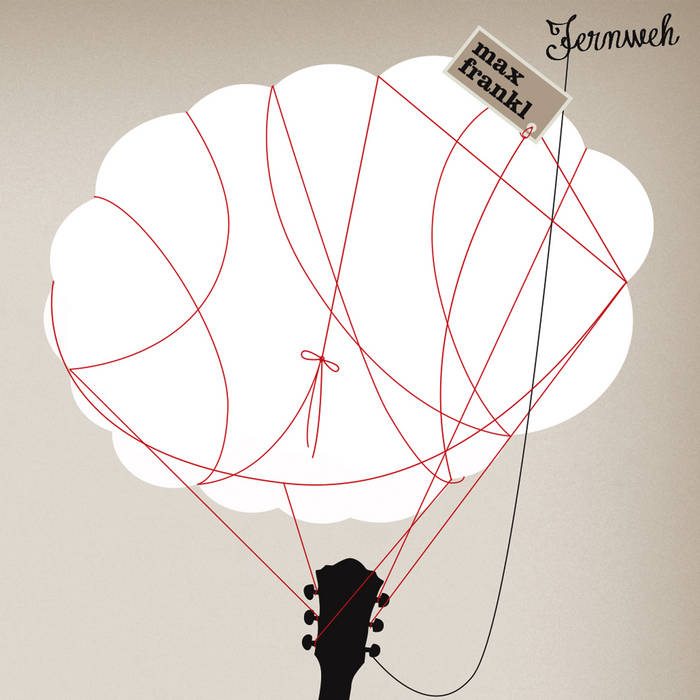 ECHO-Prize Winner Max Frankl is only 32 and already catapulting his way into the top league of European jazz guitarists. “Fernweh” is the fifth album he has produced as band leader. It is his most personal work yet, in which the German-born guitarist presents himself as a personally and musically mature artist. In the seven compositions, Max Frankl and his fellow musicians oscillate effortlessly between jazz and rock, garnished with a pinch of bossanova and a few psychedelic sounds. Distorted guitars, echo effects, tape-recorder-like delays and loops - all of these belong to Frankls new sound, with which he takes his listeners on a musical journey.

"It is always gratifying to discover a new voice in jazz. Of course, for jazz fans throughout Germany, Max Frankl is hardly a new voice at all. His previous four releases -- 2005’s Frankzone, 2008’s Sturmvogel, 2011’s Francis Drake: Stories and 2012’s Home -- earned critical acclaim while establishing Frankl as a rising star in Germany (he was named “Best Guitarist“ in the 2012 ECHO JAZZ Awards and was a nominee for the 2014 German Music Composers Award). But to these Stateside ears, Fernweh is an auspicious introduction to a gifted guitarist-composer worthy of wider recognition.
Fueled by the highly interactive rhythm tandem of bassist Dominique Girod and drummer Claudio Strueby and bolstered by the complementary flights of saxophonist-clarinetist Reto Suhner, Frankl showcases his considerable fretboard facility and improvisational daring on this outstanding release. And while he may be steeped in the jazz tradition (he grew up listening to his father’s Chet Baker and Miles Davis records, had Charlie Parker posters on his bedroom wall and ended up playing with such inveterate swingers as saxophonists Lee Konitz, Benny Golson and Emil Mangelsdorff), he is not above dealing with dissonance, audacious rock and funk beats or stomping on a fuzz box now and then. In that regard, Frankl is part of the modernist six-string lineage that begins with early inspirations like John Scofield, Mike Stern and Pat Metheny and continues with the next generation of guitarists who followed in their wake, including Wolfgang Muthspiel, Kurt Rosenwinkel and Ben Monder (all three of whom Max studied with at different points in his musical development).

“During the last couple of years I worked on my sound using different effects like reverb, tape delays, EQs and some loop units,” says the 32-year-old guitarist from Weilheim in the south of Bavaria. “From a musical point of view I think it is very important to be able to improvise with all the possibilities that a guitar player has, sound-wise. I want to be able to find new territory. That`s why I constantly work on my sound and why I always strive to add new colors to it.”
Frankl paints with a rainbow of colors on Fernweh, his fifth release as a leader. Shifting from clean-toned electric to steel string acoustic, distortion-toned electric and sublime nylon string acoustic, he conjures up tones and textures that perfectly suit the varying moods of the thoughtful compositions heard on this ambitious outing.
Rather than coming out of the gate with chops ablaze on the opening track -- a natural tendency for one with so much facility -- Max instead takes a far more zen-like approach on the ruminative “Zurich” by gently arpeggiating in classically-trained fashion on his steel string acoustic for a full two-and-a-half minutes before the band enters. With Suhner’s alto clarinet setting a melancholy tone against a slow-grooving dirge, Frankl then takes his time before offering a warm, lyrical improvisation before the piece builds to a stirring crescendo.

The urgently swinging “Aufbrechen” places Max firmly in the modernist camp as his tight unisons on the frontline with Suhner’s alto sax recall the indelible hookup between Scofield and Joe Lovano, Stern and Bob Berg (or more recently Bob Franchescini) or Rosenwinkel and Mark Turner. “Scofield`s Meant to Be was one of the albums I listened to over and over again,” Max recalls. “The sound and flexibility they have in their piano-less quartet is a big influence on my playing and writing. Mike Stern is also one of my all time heroes. His Upside Downside was one of the first CDs I bought. The unison energy he establishes with Bob Berg on that album is overwhelming.” Suhner contributes a potent alto solo on this surging number which builds to a dissonant peak before Frankl kicks on the distortion pedal and unleashes with a vengeance. One can also hear the influence of Monder in the warm, slightly distorted guitar tone and odd intervallic lines in his intense solo. At around the 5:30 mark, the rhythmic pulse drops out as Max and Reto engage in a delicate contrapuntal dance. Frankl then underscores Suhner’s alto playing with some chordal swells before switching to nylon string acoustic arpeggios to conclude the suite-like piece on a soothing note.
Says the guitarist of his rare chemistry with his frontline partner, “I had heard of Reto`s playing a lot when I moved to Basel, Switzerland, to study with Wolfgang Muthspiel. Everybody was full of praise for his sound and his ideas, saying that he might be the most original voice in Switzerland. And when first played together in 2009 in the Zurich Jazz Orchestra I was immediately impressed by one beautiful long solo he played on Thad Jones’ tune ‘Groove Merchant.’ And during the set I thought to myself, ‘That`s my man for a new group!’”

The two would eventually form a band, play their first gig and forge an immediate chemistry together. “We talked a lot about the ideas we wanted to express in our music,” Max recalls. “We both liked a warm sound on our instruments and loved playing in unison. So we worked a lot on the interplay, providing a vivid harmonic environment and at the same time being able to suggest melodic ideas so that every solo is an open field for communication, in both directions.”
That quality establishes the playing field throughout Fernweh, whether it’s on Suhner’s quirky “Copy/Paste,” which has Frankl providing warm, bossa nova styled comping on nylon string acoustic beneath Reto’s soprano work, or on the saxophonist’s mysterious “‘80s,” which travels from challenging, Zappa-esque unison lines on the head to a dreamy rubato interlude that utilizes backwards guitar effects before returning to the angular, chops-busting theme.
Frankl’s compelling “Schweben” makes dramatic use of space while conveying a sense of place. As he explains, “‘Schweben’ means to hover. This tune is also influenced by the feeling of an overnight transatlantic flight, where my thoughts and dreams floated while I was listening to Aaron Parks’ ECM-debut Arborescence.” Suhner’s alto clarinet blends beautifully on this affecting number which is underscored by Strueby’s gently shuffling brushwork and anchored by Girod’s resounding bass tones.

Suhner’s “Second Thoughts” is another prime example of sax and guitar locking in on some impossibly tight unison lines on the complex head before Frankl launches into an extended distortion-laced barrage that is brimming with the sound of surprise. Girod’s freewheeling contrapuntal bass lines are particular effective here in tandem with Strueby’s conversational approach to the kit, adding to the open-ended vibe of this provocative piece.
They conclude on a triumphantly swinging note with Frankl’s “Fort Greene,” a tune written about a former place of residence in Brooklyn. As he explains, “In 2013, during the time that I took lessons with Ben Monder in New York, I spent two months apartment-sitting in the Park Slope section of Brooklyn for the writer Rafi Zabor. When he returned, I found a place to live on Lafayette and Washington Avenue. Fort Greene Park is only a few blocks away. I listened to a lot of music while walking or running through the park and also experienced the turn of the seasons there, from humid summer to beautiful fall to the coldness of winter. Lots of good memories there, so I wanted to dedicate a piece to all these feelings.”

Suhner soars on soprano sax on this exhilarating closer set in 7/4 time. A little past the midway point, the tune takes a radical shift in direction as Suhner switches to alto clarinet and Strueby lays down a serious funk beat. Frankl naturally digs into this deep groove and wails with Sco-like authority, and just a touch of Brooklyn swagger.
As for the album title itself, which translates into “wanderlust,” the accomplished guitarist-composer says, “It describes my feeling that I want to dedicate the next ten years of my life to playing, exploring and living in New York. Over the course of the last ten years I’ve studied and lived in five different European cities (Munich, Amsterdam, Basel, Lucerne, Zurich), have played lots of gigs and have gained great public acclaim for my work. But I always knew that I wanted to move to NYC, that was where my heart wanted to go. Now that I’ve spent six months there I can say that there`s so much that draws me to the Big Apple -- the unbelievable level of high musicianship, the way that rhythm sections play, the way how the tradition of jazz is honored. Also the kindness and how humble even the greatest musicians treat their audiences and fellow musicians. The groove of the city, the kindness of the New Yorkers, the living room sessions in Brooklyn. So, this title marks the starting point for all of this.”
Stay tuned to see where Max’s journey takes him from here". -- Bill Milkowski

For years, Max Frankl held a secure spot on the A-list of young German jazz hopefuls. In 2012, things started to develop rapidly, and Max found himself on stage receiving the prestigious ECHO Jazz award for best guitarist in Germany. Frankl immediately responded to the new found status by taking his group on a cross country tour of Africa, followed by a six month sabbatical in New York City. ... more

Bandcamp Daily  your guide to the world of Bandcamp

Featuring Oakland sounds from the Smart Bomb collective and Samplelov.